The Permafrost Coastal Erosion Research Coordination Network (PCE-RCN) is established to identify challenges of and solutions to Arctic coastal permafrost erosion as well as its socioecological impacts by converging natural sciences, social sciences, and engineering. The project is funded by the Office of Polar Programs of the National Science Foundation.

The researchers of five lead investigators will serve as a nucleus to bring additional twenty-five researchers, 52 practitioners, policy makers, and Alaskan local community representatives to RCN, so that the challenges can be better understood and appropriately addressed in a broad scheme.

The Arctic is currently subject to major and rapid changes in ecosystems, socioeconomic systems, and environmental processes. Increasing air temperature at a rate two to three times fazster than the global average is warming and thawing permafrost, which is fundamentally affecting the Arctic’s built and natural environments in cities, villages, military installations, and oilfields. Permafrost, a subsurface layer that remains at or below 0°C for at least two consecutive years, is a critical component of the cryosphere and the Arctic system. Permafrost regions occupy approximately 24% of the terrestrial surface of the Northern Hemisphere and 85% of Alaska (Brown et al. 1997; Jorgenson et al., 2008). The warming and thawing of permafrost is seriously disrupting ecosystems and infrastructures.​

Coastal erosion along the ocean shore and riverbanks is threatening many Alaskan communities. More than 85% of Alaska Native villages are negatively impacted by coastal erosion and flooding (USGAO 2003). Of these 184 villages, 17% have been identified as facing imminent threats to life and property, while nearly half of them have already decided to relocate (USGAO 2009). Lantuit et al. (2013) reported $140 million is needed for the Kivalina village, Alaska alone to adapt and eventually relocate. Recently, Melvin et al. (2016) quantified the economic impacts of climate change on Alaska public infrastructure, including damages related to near-surface permafrost degradation, under the representative concentration pathway (RCP) scenarios and concluded that potential damage to the public infrastructure could be billions of dollars. 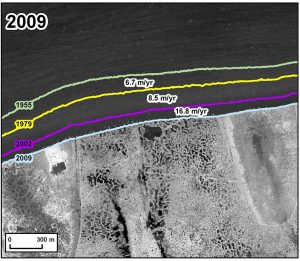 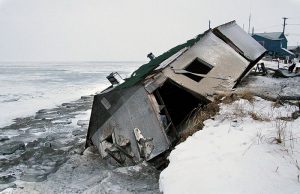 An abandoned house at the west end of Shishmaref, Alaska, that slid due to coastal erosion in 2005. Residents have voted to relocate the community to the mainland (Mele and Victor 2016). ​ Photo courtesy of Diana Haecker.